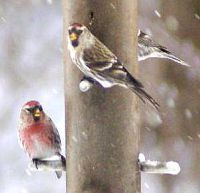 This winter is an irruption year for birds.  Three of the invaders are pictured here by Mark McConaughy at Bushy Run Battlefield’s feeders.  They are common redpolls, a very small finch with a red cap and black chin who normally lives in the boreal forest and taiga of Canada and Alaska.  (The male has a rosy chest.)

Last Sunday I went to Bushy Run to see these tiny invaders because I hadn’t seen them for 10 years – not since the irruption of 1997-1998.  That’s how infrequently they come this far south.

Why do they stay north most years but visit us occasionally in winter?  Ron Pittaway of Ontario Field Ornithologists monitors food supplies in the northern forest and makes a winter finch prediction every year.  This year the tree seed crops of birch, alder, spruce and fir are all quite low.  The winter finches would find little to eat in Ontario.  He predicted an irruption.

Redpolls, who thrive on birch and alder seeds, are not the only species to invade southwestern Pennsylvania this winter.  Others include:

I saw a northern shrike in November at Moraine State Park and redpolls last Sunday.  I’m still hoping to see evening grosbeaks and pine siskins before the irruption ends.  I almost want winter to last a little longer so I have more time.  Can you believe it!