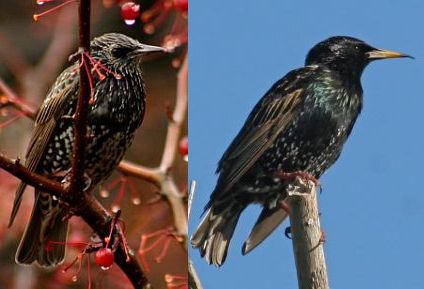 Today’s blog is a historical costume drama and the stars are “Star-lings.”

Have you noticed that European starlings are changing into their sleek spring costumes?  I have.

To show you what I mean, I’ve put two of Chuck Tague’s pictures side by side.  On the left is a starling in non-breeding plumage.  His feathers look very speckled and his beak is dull gray-brown.  On the right is a starling in spring breeding plumage.  The speckled tips on his breast and head feathers have worn off so he looks glossy black-green – almost oily – and his beak is yellow.

Now, for the history and drama.

Starlings are called “European” for good reason.  They didn’t live in North America until 1890 when a Shakespeare fan, Eugene Scheifflin, released 100 of them in New York’s Central Park because he wanted every bird mentioned in Shakespeare to live in the United States.  Starlings made only one appearance in Shakespeare and that was because they are mimics.

Starlings can mimic many sounds including the calls of other birds.  In the wild they sound like this, but people can keep them as pets and teach them to say many things.   See Techno the starling’s video.

In Shakespeare’s Henry IV, Part I, Hotspur is angry at the king and says to Worcester,
“He said he would not ransom Mortimer,
Forbade my tongue to speak of Mortimer,
But I will find him when he lies asleep,
And in his ear I’ll holloa “Mortimer.”
Nay;
I’ll have a starling shall be taught to speak
Nothing but “Mortimer,” and give it him
To keep his anger still in motion.”

Today our starling population ranges from Alaska to Mexico and is estimated at 200 million.

200 million!  That’s a lot more “copies” circulating in North America than you’re likely to find of Henry IV, Part I.