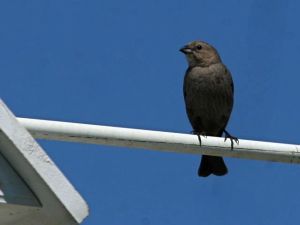 My friends will tell you this bird is a villain, a despoiler of songbird nests, a wrecker of warbler home life.  She refuses to raise her own young, foisting them off on unsuspecting foster mothers.  To make matters worse, she sneaks in and kills the foster mother’s own young so that hers have a better chance to grow up.

This is a female brown-headed cowbird.

I don’t know why she won’t make her own nest.  Perhaps it’s because cowbirds are nomads, following cattle and buffalo herds to eat the bugs and seeds they churn up.  With the herd on the move, her own nest would be a few counties away in no time.

So Mrs. Cowbird picks on a species that’s slightly smaller and lays an egg at dawn when the warbler or sparrow mother is away getting food.  If she has time, Mrs. Cowbird kicks out the foster mother’s true egg.  Not only that, her egg usually hatches earlier so it gets a head start on its foster siblings.  They die, the cowbird lives.

Gray catbirds are able to recognize their own turquoise eggs.  Cowbird eggs are slightly larger and blotchy white as shown in the composite at right.

When a catbird finds a cowbird egg in her nest, she throws it out.

In the battle of Cat(bird) versus Cow(bird), the Cat wins.

2 thoughts on “Cat versus Cow”