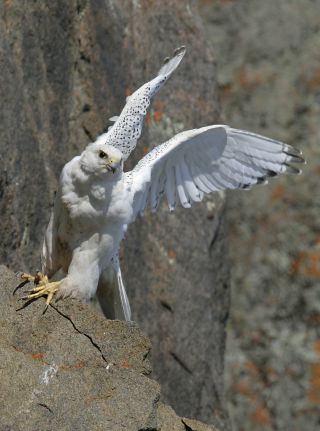 If you’re a falcon fanatic like I am you won’t want to miss White Falcon, White Wolf,  the season opener of PBS’s Nature, starring the largest falcon on earth.

The show tells the story of the brief arctic breeding season, focusing on a family of gyrfalcons and a pack of arctic wolves.

The setting is the stark landscape of Ellesmere Island, the northernmost point in Canada.  It is summer, but only for three short months.  In that time all the arctic creatures must court and mate, give birth and raise young.  The challenge is in the timing.  If the food supply is not ready or not adequate, the young starve.

The photography is stunning and required lots of patience and stamina.  I can barely imagine the days – maybe weeks – the photographers must have spent in a blind on a neighboring cliff.   The sun never sets during the arctic summer so how did they avoid detection, not only by the gyrfalcons and wolves but by the many other birds and animals in the film?

Don’t miss it!  The show premieres this Sunday, October 26 at 8:00pm.  In the Pittsburgh area watch it on WQED-13, or if you have HDTV on WQED-HD.  If you live outside WQED’s broadcast area, check your local PBS station schedule to be sure it’s at 8:00pm.

p.s.  The gyrfalcons are beautiful, but for sheer cuteness watch for the arctic foxes.