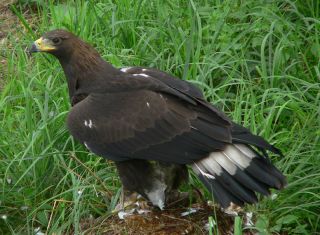 Every fall I visit the Allegheny Front Hawk Watch near Central City, PA in hopes of seeing a golden eagle, but for the past several years I have chosen the wrong days to do it.

Golden eagles pass through southwestern Pennsylvania from the third week of October to the end of November.  Because the hawk watch faces east, the best condition for seeing birds is an east wind but that direction can also bring the absolute worst weather – thick fog.  Witness my last visit to The Front in November 2007.

Years of bad timing left me discouraged about visiting the hawk watch so I asked Eric Hall, who spends a lot of time out there, to email me if he thought the weather would be good.  Eric’s email arrived last Friday so I rolled the dice and went out on Saturday.

Last Saturday was great!  The first golden eagle flew past at eye level.  He was easy to see but oh, such a brief moment to see him in!  Five others passed by much higher and two of them lingered.  That’s because both were being harrassed by up to three red-tailed hawks.

The size difference between goldens and red-tails is astonishing.  We all think of red-tailed hawks as large birds but when you see one next to a golden eagle it’s dwarfed.  It’s similar to watching a blue jay harrass a red-tail.  That’s how big a golden is.

Eastern golden eagles nest in Canada and migrate to the mountains of West Virginia where they spend the winter chowing down on mammals.  They follow the Allegheny Front to get there, passing through a narrow corridor between the Front and the first mountain in the Appalachian range.  We know their route because the National Aviary is working on a Wind Power and Golden Eagles project, fitting golden eagles with satellite transmitters to track their migration.

There’s still plenty of time to visit the Allegheny Front Hawk Watch to see golden eagles.  If the weather’s right, they’ll be there.  Remember to dress warmly!  Hawk watching is just about the coldest activity on earth.  Take an extra coat!  And click here for directions to the site.