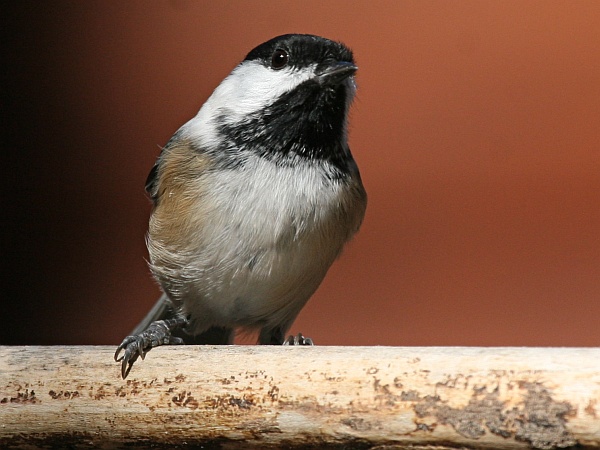 Most birders east of the Rocky Mountains never have to ask this question, but along an east-west line that surrounds the southwest corner of Pennsylvania it’s an important question indeed.  It’s one I often ask myself as I travel around the region.

Two species of chickadees live here – black-capped and carolina – and they look a lot alike.

Because chickadees are non-migratory you can usually be certain of the species based on your location in eastern North America:  black-caps live in the north, carolinas live south.  But around here you have to think about the line – are you on the black-capped or carolina side? – and you have to check field marks.

Black-capped chickadees have white on their wings that looks like an inverted hockey stick, their sides are olive and the edge of their black bib is a ragged line.  They sing a two-note song (fee-bee) and slowly say “chick-a-dee, chick-a-dee-dee.”  They live in the Laurel Highlands and north of Pittsburgh so if you’re in either of those places you can be fairly certain of the species.

Carolina chickadees live in Allegheny County and further south.  They’re smaller with proportionally shorter tails, they don’t have the hockey stick shape on their wings, they have less olive on their sides and the border of their black bibs is more distinct.  Their song is four notes (fee-bee-fee-bay) and their chickadee call is much faster.  The guides say song is the best field mark.

But notice how these descriptions are all comparatives of “more this” and “less that” than the other species.  Since it’s unlikely you will find these species next to each other it’s not very helpful to compare them, especially when you’re on the chickadee dividing line.

And there are further complications.  Along the dividing line they can expand or contract their ranges, they borrow each others’ songs and – even worse – they hybridize!  When that happens the only way to tell them apart is by a DNA test.

So have a little patience with those of us who live on the chickadee border.  If we say we’ve seen a “chickadee species” it’s because we left our DNA kits at home.  😉

(photo of a Black-capped Chickadee by Chuck Tague)

3 thoughts on “Which Chickadee Are You?”