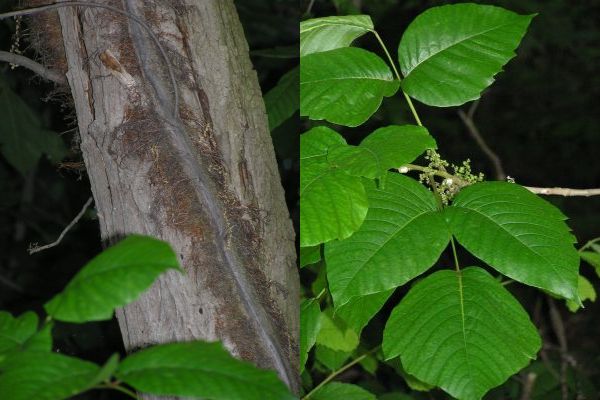 If you’re like 85% of the human race, you’re allergic to Poison Ivy.  Some people are so sensitive it puts them in the hospital.  Others get no rash for years and then their bodies “switch on” one day.  Even if you’re part of the 15% who won’t react it’s best to be careful, if not for yourself then for others.

I’m not extremely allergic to poison ivy but I’m careful to know exactly what it looks like because the rash is so uncomfortable.  The rash is caused by an oil found in the plant’s leaves, roots, stems, vines and berry hulls called urushiol.  Humans are allergic to it; birds and other mammals are not.  Deer, horses, cattle and goats eat poison ivy without ill effect.  Birds eat its berries.  Bees pollinate its flowers.  Only humans are plagued by it.

Amazingly you can come in contact with urushiol and not know it for up to two days.  You can pick it up by brushing against the plant, touching clothing or tools that have touched the plant or its roots, or petting an animal that walked through poison ivy.  (How sneaky!)

If you know you’ve touched poison ivy, you can prevent the rash by a liberal dousing of the affected area with rubbing alcohol then copious water, but you have to do it within 4-6 hours of contact.  Otherwise, the oil works its way into your skin and breaks down.  A day or two later there’s nothing to wash off but your body begins a huge over-reaction:  red, swollen skin and spreading blisters.  This is not because the oil is still present but because your body is freaking out.

The good news is that if you can avoid contact with poison ivy for many years, your body may forget the allergy and allow you a mild exposure every once in a great while.  But you have to remain vigilant.  Frequent exposure restarts the allergy.

So how do you identify this annoying – even dangerous – plant?

Poison ivy’s greenish flowers and white berries grow in the leaf axils (see photo on right).  Not all of the plants bloom.  They must be two years old to do so.

Though poison ivy is classified as a vine you’ll often find it growing from gnarled woody stems.  Sometimes the stems support so many leaves that the plant looks shrubby.  When the stems find something upright to lean on they throw out aerial roots and climb as vines that look hairy (see photo on the left).  The vines and stems never have thorns.

In autumn the leaves turn red, dry up and fall off.  The vines become bare and the woody stems stick up from the ground like thin gnarly fingers.  Interestingly the dead leaves don’t cause a rash because the plant pulls the urushiol back into itself as it prepares for winter.

Now that you’ve read about it, are you ready for a quiz?  Click on the photo above and see if you can recognize the poison ivy in the linked photo.

Or try this quiz on the Poison Ivy website.   (Also see the Comments for more links and advice.)