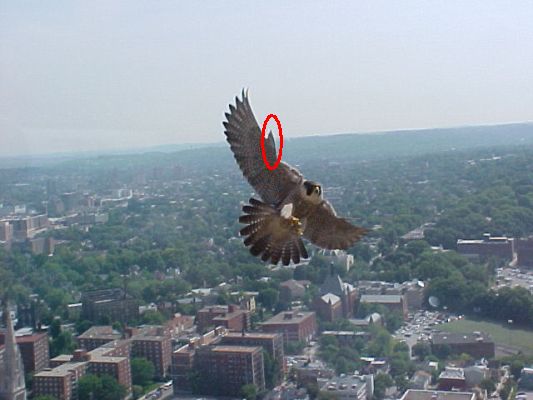 This is my favorite part of bird anatomy because I see peregrine falcons use it to such good advantage.

The alula is the bird’s “thumb” positioned on the top edge of the wing and covered with three to five small feathers depending on the species.  Normally it lays flat on the wing and is hard to see but birds raise their alulas to prevent a stall during slow flight.  In this position the air can flow faster over the top of the wing, creating lift when the wing is perpendicular to the ground.  Wikipedia explains that this allows “a higher than normal angle of attack” which is exactly what Dorothy (the adult female peregrine at Pitt) is doing here — attacking the bird banders who are coming for her babies.

Big airplanes solve the same problem of creating lift with movable parts called slats that act like alulas.  Look out the window of a jet before take-off and you’ll see the slats have been moved away from the leading edge of the wing.  Lift!

So when you see a bird landing or attacking, look for its alulas.  I’ve circled one of Dorothy’s in red so you know what to look for, or check yesterday’s blog and you’ll see both alulas on the great egret, raised like thumbs pointing to the sky.

(photo by Jack Rowley, modified to show the alula)