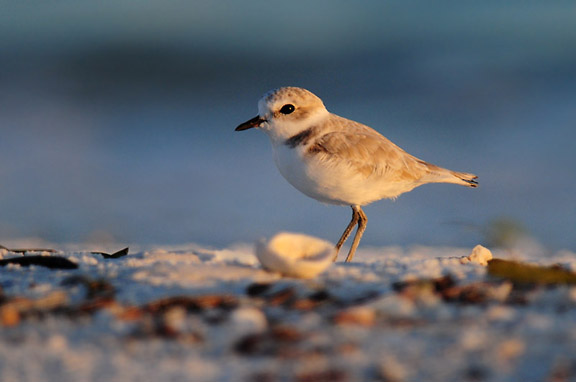 I had promised myself that for the next two blogs I would not mention snow, but this is the photo that came up in rotation for my “Beyond Bounds” series.  I can’t help it.  He’s a snowy plover.

Once upon a time, in August 2002, a snowy plover stopped at the pond at Imperial grasslands in Allegheny County.  This bird is so rare in southwestern Pennsylvania that many, many birders made the trip to see it but I procrastinated. For a short time the pond was the Mecca of Birding and then the bird was gone.  I had procrastinated too long.  I missed him — and he would have been a Life Bird (the first I’d ever seen in my life).

Snowy plovers are uncommon in North America.  Because they rely on sparsely vegetated beaches they are listed as endangered in Mississippi and threatened in Florida and along the Pacific coast.  Fortunately they also breed at inland alkaline lakes so they’re not completely dependent on the sandy coast.

Eventually I saw my Life Bird snowy plover at Henderson, Nevada’s sewage treatment plant, also known as the Henderson Bird Viewing Preserve.  As I scanned the empty empoundments with my binoculars I stopped my gaze at a little group of shorebirds.  When I saw one that looked like this I thought, “That’s a snowy plover.”  Years of flipping through the field guide had paid off.  It felt like I’d seen him before.

But I haven’t seen one since.

Steve Gosser photographed this one in Florida.