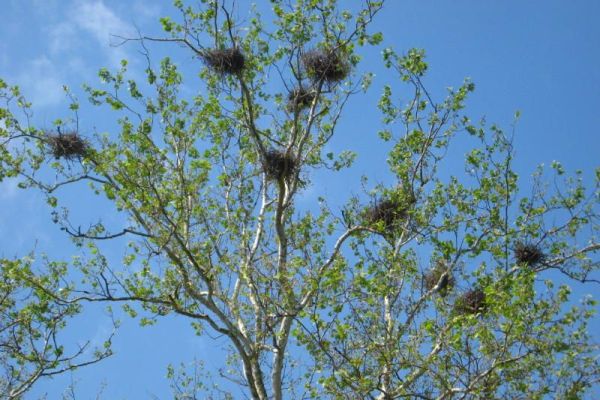 Have you ever seen a tree that looks like this with a lot of big nests in it?  Surrounded by trees with similar nests?  If you’re in southwestern Pennsylvania, you’ve found a great blue heron rookery.

Great blue herons nest colonially near creeks, rivers, lakes and wetlands.  Their group of nests is called a rookery after the colonial nests of the Eurasian rook, a common bird like our crow that’s called a “rook” because of the sound he makes.

Great blue heron rookeries are large, often containing several hundred nests that are used year after year.  In Pennsylvania they’re usually located in sycamores in an isolated place on an island or in a wooded swamp.  The location is chosen for its access to food and isolation from predators, but food doesn’t need to be right there.  Adult herons will commute nine miles on foraging missions, so the heron you see hunting koi in your backyard pond may well have flown a long distance to get food for his kids.

In March the great blue herons return to Pennsylvania to set up housekeeping.  Even from a distance you can see them standing on the old nests making home improvements, a twig here, a stick there. They also do elaborate courtship displays on the nest including stretching, bill snapping and a crest raising display.  They look too large to use the nests, but I’ll show you how they do it in tomorrow’s blog.

If you have the chance now’s the time to notice heron rookeries, for in six short weeks they’ll be hidden.  The trees will be covered in leaves by May.

And remember, if you find a rookery don’t disturb the birds.  They’ve chosen the site because it’s isolated from predators, including humans.  Herons will abandon a rookery where the disturbance becomes too great.