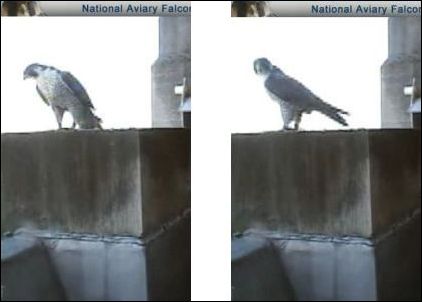 Something strange has been going on at Gulf Tower since last weekend.  Now we know why!

It began Friday night, March 19.  Tasha sat on the nest at 10:40pm and watched the sky.  Within minutes she stepped out of view and from that point onward we heard periodic wailing for most of the night, though no peregrine was visible.  Wailing can mean many things including “come here” and “stay away,” but it isn’t the sound of peregrines locked in combat.

That night there was no evidence of a fight at the nest — no fight sounds, no birds on camera.

An hour before dawn Tasha returned to the nest and slept.  Half an hour later Louie arrived and tried to bow with her but Tasha would not bow.  She looked at him, then left to tackle whatever was out there.  It was a young female peregrine challenging her for the site.

For three and a half hours nothing happened.  Silence.  Then Tasha arrived at the nest, all pumped up and running on adrenaline (if peregrines have adrenaline).  She was sleeked for battle and her left wing drooped, an old injury she hid most of the time.  She shouted excitedly to Louie and left quickly.

Louie lingered at the nest for several minutes.  At one point he stood over Tasha’s two eggs, yipping softly, but something in the sky soon distracted him and he bounded off stage.  In half an hour Tasha appeared again very briefly.  That was 10:45am, the last time she appeared on camera.

Seven hours of silence.  Nothing except for two brief visits by Louie alone.

Then at 5:45pm Louie arrived at the nest and called, “Come bow with me.”  His audience needed encouragement.  He called and called, bowed and bowed.  Finally his new lady arrived, a female peregrine with a pale back, no white wing feather and in top physical condition.  For the next several hours they repeatedly courted at the nest.  She was now his queen.

That was Saturday night, March 20.  There are no video archives for several days after that, but everyone watching the falconcam knew the situation was odd.  Why were two peregrines at the nest but no one incubating the eggs?

Yesterday Dr. Todd Katzner of the National Aviary went to the Gulf Tower to solve the mystery.  He was able to observe the new female and read her bands as she courted with Louie: black/green M/93.  Born at the Landmark Building in Akron, Ohio in 2007, her back is paler than Tasha’s and her wings are normal.  She has no white wing feather.

Since Monday the fervent peregrine watchers at Make-A-Wish, whose offices are near the nest, suspected Tasha was gone forever.  They’ve been Tasha’s fans for many years and were sad about this turn of events, so they wanted to honor the new female with a happy, hopeful name.  Even before they knew her identity they called her Dori, which means “wish” in Romanian. (*)

Dori has wanted to nest in Pittsburgh for quite a while.  She first tried the 62nd Street Bridge where she was identified last October by Dan Yagusic, but she kept a lonely vigil there, unable to attract a mate to the site.  In January Dan found her at the 40th Street Bridge, still alone.

As spring approached her hormones kicked in as they do for all peregrines.  Dori needed a nest and a mate.  The bridges were fruitless.  She flew downstream… and the rest is history.

Tasha was a very successful peregrine.  When she disappeared last weekend she was at least 14 years old and had raised 44 young at the Gulf Tower.

We wish the same great success for Dori.  May she live long and have many babies!

And, yes, we’re all watching for her first egg.

p.s. Remember the video of two peregrines courting on Saturday evening?  I was wrong!  Tasha isn’t in that picture.  They’re Louie and Dori.  Click here to watch.

(*) Dori has many names.  Dori is her nest site name, Mary Cleo is her banding day name, and Louie has a special name for her that is unpronounceable by humans.