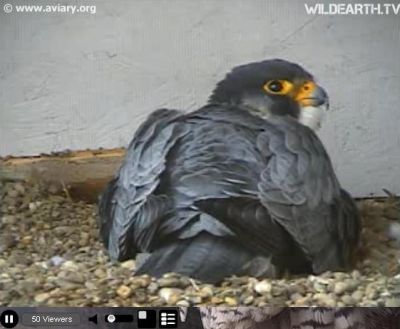 That’s the question all the peregrine watchers are asking.

It’s been ten days since Dori won the Gulf Tower site from the previous female resident, Tasha, and eleven days since Tasha laid her last egg.

For a while neither Louie nor Dori did anything with the old eggs except court and bow over them.  Sometimes Dori pushed them out of the scrape.  Later Louie would push them back in.

Then over the weekend Louie started incubating Tasha’s eggs for an hour or two at a time.  As is typical for male peregrines, he didn’t incubate them overnight but he showed up when expected — at dawn and early afternoon — as if he was taking his normal incubation duty shift.  Dori didn’t participate.

This puzzled everyone.  Are Louie and Dori disagreeing about the eggs?  Will Dori refuse to lay her own if the old ones are present?  Are the old eggs viable?  Will Louie eventually give up on them?  Will Dori eventually adopt them?

As much as this seems a drama to us, something very simple is going on.  Louie and Dori are at different stages in the nesting sequence.  He has eggs, she doesn’t.  When she lays eggs she’ll catch up to him.

Keep in mind this couple has known each other for only ten days.  If their courtship goes well — and that appears to be the case — Dori’s hormones will trigger egg laying.  She can’t “refuse” to lay eggs.  She won’t have any choice about it, and she’ll have to put them somewhere.  The only thing she could possibly refuse is the ledge where her rival nested, but she hasn’t done that.  She courts at the nestbox, she rearranges the gravel and she digs at the scrape where the old eggs were laid.  Dori will lay eggs when she’s ready.

Humans are impatient during a slow drama like this one.  Watching the webcams is a lot like watching television so we expect the action to unfold a lot faster.  But remember, the nature programs leave out all the boring bits.  They have only an hour to show you a whole year of a bird’s life.

Give this pair some time.  Nature is taking its course.

p.s. The old eggs might not be viable.  If so, the adults will move them away if they don’t hatch.

(photo of Louie from the National Aviary webcam at Gulf Tower.  Thanks to Traci Darin for the screen capture.)

38 thoughts on “What’s happening at the Gulf Tower?”