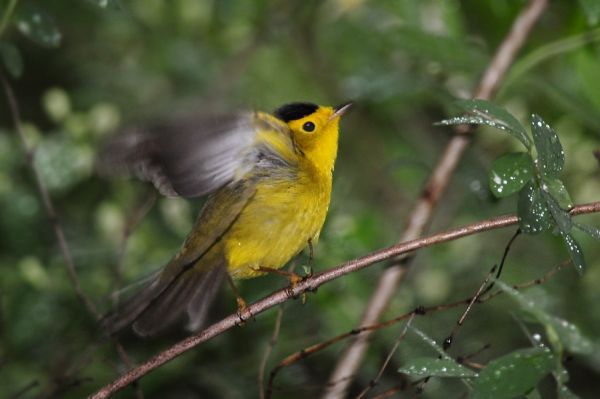 It’s been All Peregrines All The Time for a while now, but I do see other birds.

Best Bird this week by far has been the Wilson’s warbler singing in the patch of trees across the street from my house on Sunday morning.  I heard his song and went out to look.

Wilson’s warblers are bright yellow birds with a small black cap.  Unlike most warblers they can be found from coast to coast.  They winter in Central America and nest from Newfoundland to Alaska but are only seen in Pennsylvania during migration.

The bird in my neighborhood was travelling north when he reached Pittsburgh before dawn on Sunday.  He was a one day wonder.  As soon as he could leave, he was on his way.

Quite the Best Bird!

p.s. On PABIRDS, Grant Stevenson pointed out this Science Daily article on the value of urban woodlands.  The trees in my neighborhood are important for migrating birds.  How about that!

2 thoughts on “Best Bird This Week”