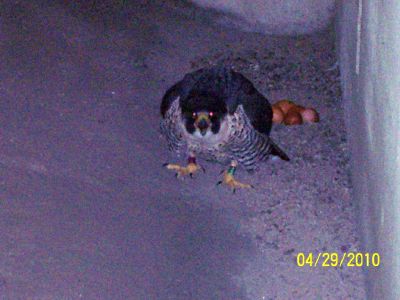 I couldn’t resist using the slogan of the Westinghouse Electric corporation from the old days when they made home appliances.

The company is long gone, dissolved by a series of buy-outs and takeovers, but the Westinghouse Bridge that carries Route 30 over their old plant site in East Pittsburgh is still there.  And it hosts a new family.

Last month PennDOT workers were stunned when they were vigorously attacked by one – sometimes two – peregrines when they attempted to work on a particular area of the Westinghouse Bridge. They called the Pennsylvania Game Commission and Beth Fife came over to check.

On her first visit Beth found no eggs, but on her second she found a female peregrine and five eggs carefully laid in deep gravel in a dark, protected area of the bridge.  Beth could see the bird was banded but could not read her bands.  She hoped the pictures would reveal the peregrine’s identity.

And here is one of those pictures, taken April 29 by PennDOT’s Val Roskosh.

This image was too far away to read the bands but Beth went back later and got a closeup.  That’s how we found out this female peregrine hatched May 10, 2005 at the Bank One building in Canton, Ohio.  She was named “Storm” at banding.  The PennDOT crew plans to call her “Val.”

As of Friday, Storm’s eggs had hatched and she and her mate, nicknamed Brian by PennDOT (no bands read on him yet), are now busy feeding their babies.  Beth will return to the bridge to band them.

Good luck, Beth.  This mother bird was calm when you visited her eggs but I bet she’ll kick up a Storm when you come back!

(photo of Storm (a.k.a. Val), the female peregrine at the Westinghouse Bridge, by Val Roskosh)

13 thoughts on “You can be sure if it’s Westinghouse”