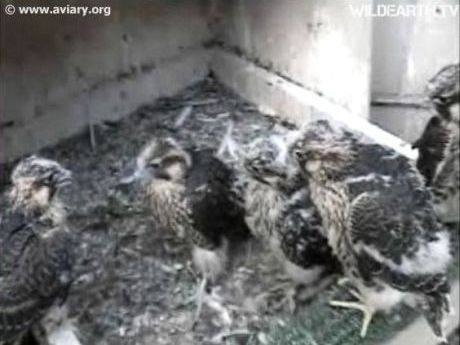 Yesterday afternoon was full of adventure for one of the five young peregrines at the University of Pittsburgh.  It’s an incident that happens every year but this time we saw it on video.

Just after 2:00pm one of the male nestlings was daydreaming on the front perch when his brother decided to use the nest as a runway. Flapping wildly and paying no attention, his brother careened to the front of the box.

Bump!  Whoops!  The young male was knocked off his perch into the gully two feet below.

The nestling was fine, he wasn’t hurt, but he had never encountered this situation before and didn’t know how to get back to the nest … yet.

When his parents found out what happened they did what all peregrine parents do — they withheld food until the youngster was hungry enough to come get it.  Nothing motivates a young peregrine so much as hunger.  He’ll even learn to fly if it’s the only way he’ll get fed.

So all the nestlings waited.  And waited.

At 4:50pm Dorothy stopped by to check and offered a scrap of meat from the corner of the nestbox.  It wasn’t a real meal.  The nestling below did not come up.

At 5:15pm she perched on the nestrail above his best escape route and looked down on her son in the gully.  He was fine.  He just had to figure it out.

Finally, after 6:30pm, he discovered he could get back to the nest if he went to the spot his mother seemed to indicate and scrabbled up a bulwark on the left side of the box.  (This area isn’t visible on the camera.  I happen to know what it looks like up there.)

The noise riveted his siblings.

Suddenly he appeared on camera!  They stared at him in wide-eyed wonder.  “What happened?  Are you OK?”

It wasn’t until 8:00pm that Dorothy finally brought them a real meal and by then they were so hungry all five screamed at the tops of their lungs.

“Good,” thought Dorothy, “The prodigal son returned.  It was well worth the wait.”

p.s.  To see how it happened, watch these two hotspots from the Cathedral of Learning archives: “Bumped out of the nest” and “The adventurer returns.”  Thanks to Jennie Barker for spotting these!

p.p.s.  Now that one of them has been off the nest, the other four will be brave about ledge-walking too.  You often won’t see all five on camera.  They’re getting ready to fledge.

(photo from the National Aviary webcam at the University of Pittsburgh’s Cathedral of Learning, video from the lost archives of Wildearth.tv)