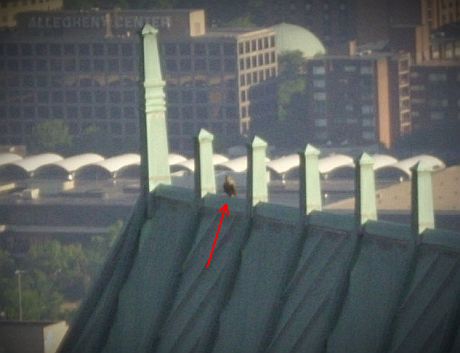 It’s getting hard to keep track of the Gulf Tower peregrine chicks even though two were still at the nest as of this morning.

Anne Marie Bosnyak and Sharon Leadbitter have been doing their best to find the fledglings but it’s a challenge. The youngsters are always on the move.

On Monday, Sharon got lucky.  She watches from inside the US Steel Tower so she can see the birds at their own level.  When they fly near Gulf and Koppers they come within her view.

Pictured here is a peregrine fledgling Sharon saw on the roof of the 34-story Koppers Building.  (I added the red arrow.)

Who knew the building had posts atop its copper roof?  I didn’t until a peregrine chose to land there.

p.s. June 22, 3:00pm: I was lucky to see three peregrines at Pitt this afternoon.  Dorothy was roosting in her favorite nook on 32East and one of the juveniles was eating on the ledge at 10East.  A second juvie showed up and tried to take the meal from his sister.  No dice!  She mantled over it.