Providing food for his lady is an important part of male peregrine courtship.

At least six weeks before his mate lays eggs, the male begins to bring her food.  At first he may seem reluctant to hand it over or she may snatch it by force, but as egg-laying time approaches she stops hunting on her own, he supplies all her needs, and they add ritual to the food exchange.

One ritual that many male peregrines engage in, and that E2 insists on doing, is an exaggerated plucking display. He doesn’t give the food to his mate right away, even if she flies out to meet him.  He makes her wait until it’s properly prepared.

The male takes the prey to a cache area, removes the head and wings and makes an elaborate show of plucking it.  The feathers fly!  As you walk below the Cathedral of Learning you’ll notice feathers floating down from above.  You won’t see the plucking display on camera. The male does it elsewhere on the cliff.

Sometimes he takes a few bites of the prey to sustain himself. When it’s ready, he presents it to his lady in the air or on a ledge.

Above, Mo offers prey to his mate Mystic in an aerial food exchange by holding it out with his beak.  Mystic flips upside down to take it using her talons.

Alternatively, the male may present it to his mate while she’s standing on a ledge.  In the photo below E2 is presenting food to Dorothy who is bowing in return. 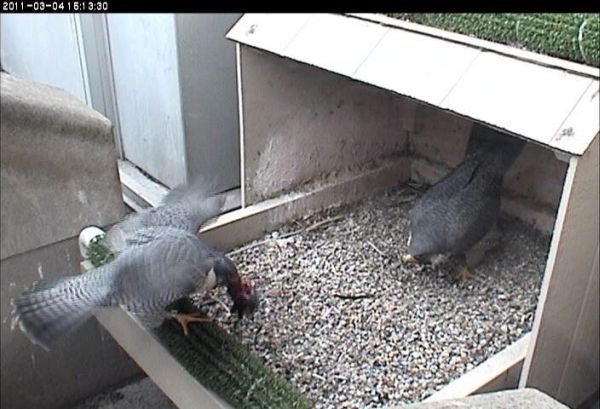 It’s very unusual for food to be taken to the nest during courtship but E2 occasionally breaks the rule.  If he feels like delivering it there, he does so, though rarely.

p.s.  If a delivery is made to the nest before the eggs hatch, the female takes the food away to eat it.