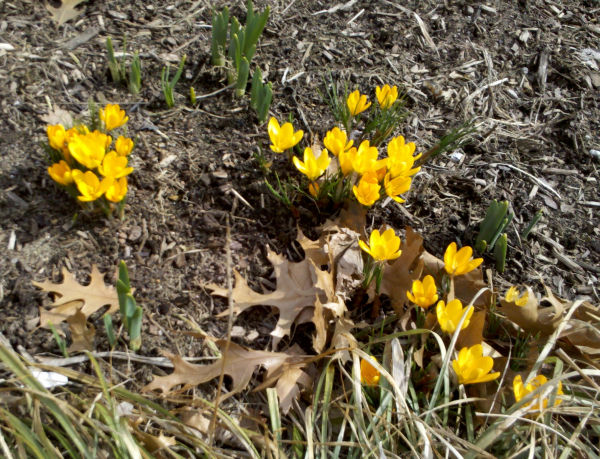 As I walked to the Cathedral of Learning at lunchtime yesterday, I made a list of all the new Spring things I found despite the chilly weather:

Do you have a list of Spring things you’ve seen lately?  Leave a comment to let us know.

And about that last item in the list:  While I was observing the halo around the sun I saw a peregrine falcon fly in from the west very high up, nearly a dot.  The bird came a little lower as it approached the Cathedral of Learning (CL) but it was still quite high when it saw E2 and Dorothy mating near the nest.  It then passed over the CL to the east and used thermals to rise higher and higher. From below it looked dark, perhaps a juvenile.  When it was a tiny dot in my binoculars it moved off to the north.  I’m glad it was no threat to my two favorite peregrines. It was just passing through.

p.s.  Here’s a definition of phenology and a list for Western Pennsylvania.
p.p.s. This is my 1,000th blog entry.