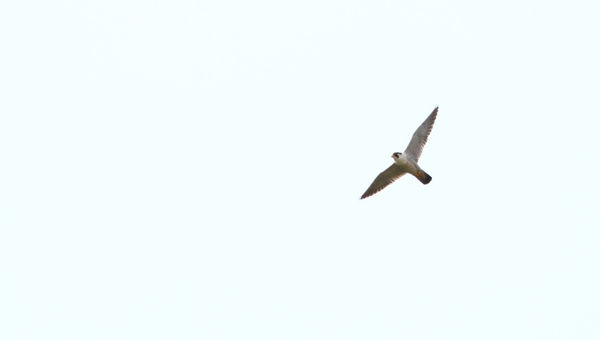 For nearly two weeks it’s been hard to find more than one or two peregrines at the University of Pittsburgh.  Then on Tuesday and Wednesday Anne-Marie and Peter commented on a flurry of peregrine activity near campus.

In the morning Anne-Marie saw a juvenile fumble its breakfast near Craig Street.  Then at lunchtime I found both adults perched on the Cathedral of Learning in inaccessible nooks, both gazing toward the northeast.  Karen, Peter and I guessed the “kids” were over there but we couldn’t see them from the ground.

To prove it, just before 2:00pm E2 soared off the building and a juvenile flew in, begging loudly.  When E2 landed, Dorothy flew and two more juveniles arrived over the treetops to see if something good was about to happen.

The excitement of seeing five peregrines at once was over soon.  The loud juvenile jumped down into the “dining” area and the rest of the family flew out of sight.  They’re way too hard to track now, they fly so well.

These incidents got me thinking:  Why didn’t the peregrines hang out at Webster Hall for the past two weeks like they did in prior years?

This year, thankfully, there’s no compelling reason to be at Webster Hall.  The chimney is covered.  No one is trapped.

But late June is the time when Pittsburgh’s young peregrines are curious and unknowingly reckless.  They fly fast and test their limits.  If all goes well, they push the envelope and recover without harm.

I’m bracing myself for tomorrow, the day each year when I hear bad news about a young peregrine if there’s any bad news to tell.

Cross your fingers or say a little prayer for Pittsburgh’s peregrine “kids.”   May they learn safely and well!

5 thoughts on “Our Peregrines in Late June”