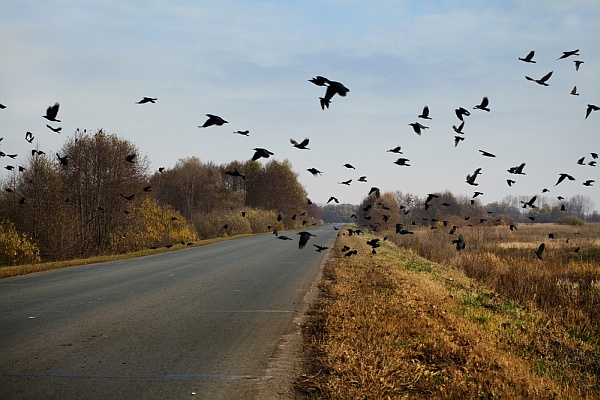 The trail follows Little Beaver Creek as it cuts through the surrounding hills.  Along the way there are remnants of the channel and locks of the Sandy and Beaver Canal that ran for 73 miles through 90 locks and two tunnels from Bolivar, Ohio to the Ohio River at Glasgow, Pennsylvania.

Completed in 1848, 20 years after it was chartered, the canal operated for only four years.  It closed in 1852 after the Cold Run Reservoir Dam broke and ruined much of the canal.  By then competition from the Cleveland and Pittsburgh Railroad made it uneconomical to rebuild.  The canal boom ended abruptly.

At Grey’s Lock I stopped to read the historic marker but I didn’t absorb what it said because my attention was snagged by the sound of crows.  Just out of sight, they were flying my way.  150 passed overhead and congregated somewhere on the north side of the creek, still within earshot.

That flock is just the start of something big.

Right now the crows are gathering in the countryside.  150 here, 200 there.  Some have made it to town, but no great numbers yet.

Soon, very soon, the crows will come to Pittsburgh.  By winter we could have 10,000!