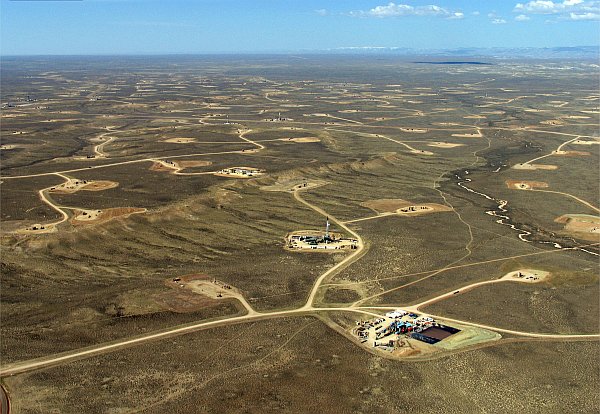 A study led by Anna Chalfoun of the Cooperative Fish and Wildlife Research Unit at University of Wyoming has shown that the oil and gas boom in southwestern Wyoming has altered the landscape so much that even songbirds have declined where sagebrush once ruled.

In 1998 the Bureau of Land Management opened the Jonah gas field to intensive natural gas development.  The result is that the Upper Green River Valley changed dramatically from a sagebrush wilderness to a fragmented evenly-spaced industrial zone.

Those who love Wyoming saw an immediate change in the land and wildlife and petitioned BLM to revise their well-spacing rules.  In 2003 Skytruth collected satellite images and aerial photographs illustrating the oil and gas footprint and testified to the Committee on Resources of the U.S. House of Representatives, again petitioning for a change in well drilling techniques.

Alas, policies didn’t improve and the Upper Green River Valley has become a living experiment in intensive natural gas development.  What happens to the land, air, water and wildlife in the presence of this industrial activity?

According to Chalfoun’s study, some birds appear to be unaffected but Brewer’s, sage and vesper sparrows declined in direct proportion to the amount of wells, roads and human activity.  This is especially significant because BLM classes Brewer’s and sage sparrows as sensitive species.

Pennsylvania is conducting its own living experiment in the Marcellus shale. What happens to our forests during Marcellus industrial activity?

Listen to this report from The Allegheny Front, The Gas Boom Comes to the Forest, to find out what Pennsylvania scientists have learned so far.

(photo of Wyoming’s Jonah gas field, May 2006, by Bruce Gordon of EcoFlight for Skytruth)