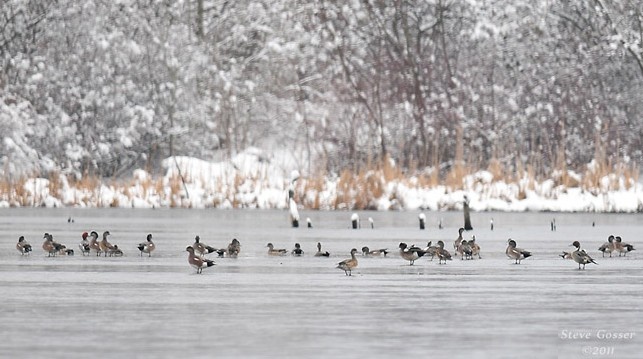 Ducks are migrating through Pennsylvania right now so I’ve been brushing up on my identification skills.

Because I don’t own a scope, I have to identify ducks from a distance using 8- or 10-power binoculars.  They always look small and their colors are muted but I’m able to do it by looking at their behavior, relative size, body shapes and color patterns.

Here are quick some tips I use to identify distant ducks.  Perhaps they’ll work for you.  (Some of you are already experts at this.  Let us know your tips by leaving a comment.)

First, get to know a common duck really well.  I suggest studying mallards because they’re everywhere and easy to watch.  What do they look like?  Study males and females near, far and very far away.  Use them as your point of reference.

Second, watch duck behavior.  How do they feed?  Do they dabble or dive?

Dabblers eat shallow food they pick from the water’s surface or pull from the bottom by tipping their butts in the air and reaching underwater with their heads and necks.  They don’t submerge.  Dabblers leap into flight directly from the water.

Divers completely submerge and swim underwater to get their food.

Below I’ve listed only dabblers (there are too many ducks for one blog!) and to save space I’ve abbreviated:    “=M” is same size as mallard,   “<M” smaller than mallard,  “HFAM” means “Hope For A Male” because the females are hard to identify.  (Yes, I’ll admit I sometimes ignore the females too hard to identify from afar.)

Do you think you can identify the ducks in the photo now?

3 thoughts on “Ducks from a Distance, Part 1 — Dabblers”