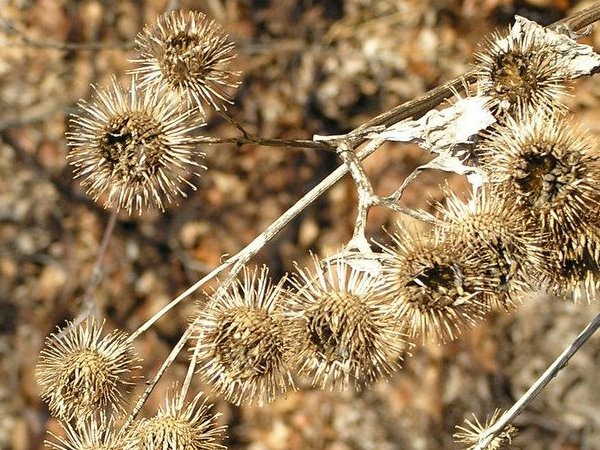 Last Saturday my husband and I participated in our neighborhood fall cleanup.  At Magee Field this involved a lot of clambering on the hillsides to collect beer cans and water bottles that people had “thrown away” in the woods.  Volunteers collected 14 large bags of garbage.

After the cleanup I threw our clothes in the wash but when I pulled them from the dryer I found an unwelcome surprise.  My socks had collected burdock and the laundry had broken it up and redistributed it as tiny hooks on the bath towels.  I spent half an hour pulling the hooks off one by one.

Lesser burdock (Arctium minus) is a biennial plant in the Aster family.  Native to Europe, it’s now invasive in North America and so successful that USDA lists it as invasive in Greenland.

Burdock spreads easily by hitchhiking on mammals.  Its purple flowers bloom in late summer inside bracts covered with tiny hooks.   In the fall the flowers dry and the bracts tighten around the seeds (shown above).  Now the ball is ready to grab fur, skin or clothing and transport the seeds to a new location.

The hooks are so fascinating that they led to the invention of Velcro.

In 1941 Swiss inventor George de Mestral went out hunting with his dog and they both came back with burdock stuck to them.  De Mestral studied the hooks and saw the possibilities for a reusable fastener.  He experimented with various materials and found nylon and polyester to be the best.  His invention was patented in 1955 and ultimately grew into Velcro USA Inc, based in Manchester, New Hampshire.

Velcro didn’t catch on at first because it seemed stiff and unwieldy on clothing, but after NASA used it on astronauts’ space suits, skiers saw its value and now the rest of us use it too.

It pays to observe nature.  In de Mestral’s case it led to great things.  As he once told Velcro executives, “If any of your employees ask for a two-week holiday to go hunting, say yes.”