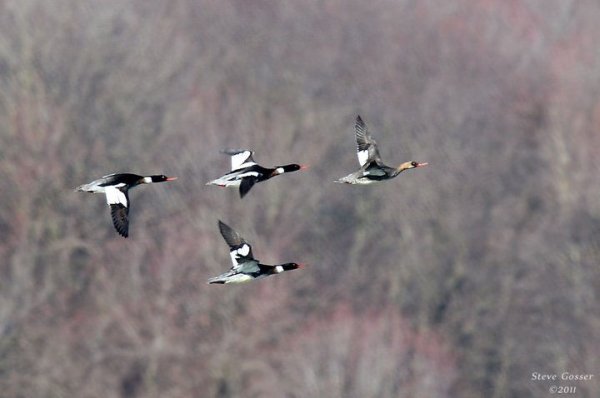 These are cold weather ducks whose breeding range is holarctic.  In North America they winter at the Atlantic, Pacific and Gulf coasts and on the Great Lakes.  This week at Lake Erie Jerry McWilliams reported large numbers of them, more than 1,500 at a time (written on 26 Nov 2011).

Like many diving ducks, red-breasted mergansers’ legs are positioned so far back on their bodies that it’s awkward for them to walk.  They don’t spend much time on land.

On the other hand, they excel in water and in the air. Their claim to fame is that they’re fastest ducks on earth.  Red-breasted mergansers have been clocked at 80 miles per hour in level flight (some say 100 mph).

How do they do this?  Scientists say their wings are shaped for high speed and they’re able to do a special maneuver with their feathers.  During the upstroke red-breasted mergansers reverse the tips of their primary feathers to provide greater propulsion, especially during takeoff.

They aren’t the fastest bird on earth.  Peregrine falcons are.  Peregrines can dive at 200 miles per hour and they’re so famous for eating ducks that their nickname is the “duck hawk.”

So how would a peregrine match up against a red-breasted merganser if he had to chase it in level flight?   He’d lose.  The peregrine’s maximum level flight speed is 70 mph.

This duck can escape a peregrine falcon.

1 thought on “Talk About Speed”