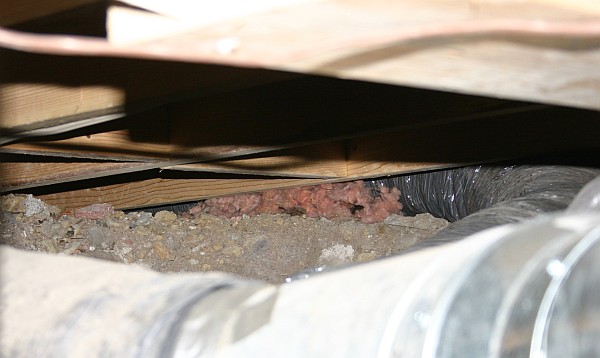 An unpleasant smell is coming from the crawl space under our kitchen sunroom.

I first noticed a hint of it on Wednesday evening but I couldn’t find the source though it seemed strongest in the basement.  Day after day the smell has increased until this morning it is noticeably putrid.  I think something died in there.  But what?

The only access to the crawl space is from inside our basement … unless you’re a mouse …  and that was the last known location of the mouse I couldn’t catch last month.  I thought he was in the heating duct but no, he was probably walking on the heating duct while collecting that pile of pink insulation you see in center of the photo.  That pile is new and unreachable by humans. No wonder he never found the trap I set upstairs.

When my mouse adventures began I put two snap traps in the crawl space but they went untouched for days.  I worried that my cat Emmy (Emmalina) would explore the crawl space so I removed the traps when I became convinced the mouse was inside the ductwork.

Since Thanksgiving I haven’t heard the mouse at all so I thought he was gone.  Dang!  I feel like I flunked Nature Observation.  I made up for my mistake this morning by again installing snap traps in case the mouse has friends.

So now the house smells bad when the furnace runs and my imagination is working overtime.  How long will it take for the smell to go away?  What if that smell is poop and not death?  What if the critter is still alive?  What if it’s a rat?

I have a feeling I’m going to buy way too much anti-rodent gear today.

p.s. That brown spot in front of the insulation is a rock, not a mouse.

5 thoughts on “What’s That Smell?”