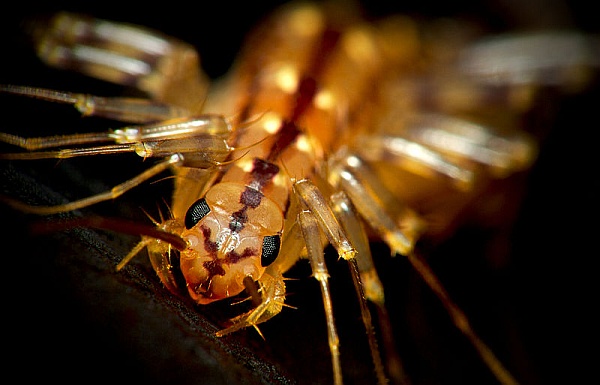 In the past week my cat and I have had some excitement when I turn on the kitchen light in the morning.  Sometimes we’re startled by a 100-legged bug that zooms across the floor to hide.  I jump back and Emmalina (Emmy) jumps forward to chase it.

Eeewww!  I’m repulsed by house centipedes but a book called Despicable Species by Janet Lembke taught me these critters help me indirectly.

House centipedes (Scutigera coleoptrata) are nocturnal raptors, the owls of the bug world.  They eat a wide variety of live prey including spiders, silverfish, ants, termites, bedbugs and cockroaches which they catch by running them down.  For this they need to be fast.

With rigid bodies their speed comes from their legs.  Amazingly house centipedes don’t have 100 legs.  Adults have 15 pairs of very long jointed legs (yes, only 30) with extra muscles that allow them to achieve a top speed of 1.3 feet per second very quickly.  The two longest legs in the back mimic antennae and the two shortest in the front are modified to sting and kill their prey.  The stingers sound scary but are very small and harmless to humans.   House centipedes can even lose a few legs to get away if captured.

Because they don’t have wax on their exoskeleton, centipedes must rest during the day in damp, dark environments so they don’t dry out.  They prefer basements and crawl spaces (I have both) and are sometimes found in the bathtub because they look for a damp place to rest.

Like many other bugs, house centipedes have a spurt of visibility in the spring.  It’s the sight of all those legs that make my scalp crawl.  I couldn’t even use an illustration of the entire bug for this post because I can’t bear to look at all those legs.

It’s reason against emotion.  Now that I know they help me, I am trying very hard not to say “Eeewww.”

(close-up of a house centipede from Wikimedia Commons. Click on the photo to see the original)

8 thoughts on “Try Not To Say Ewwww”