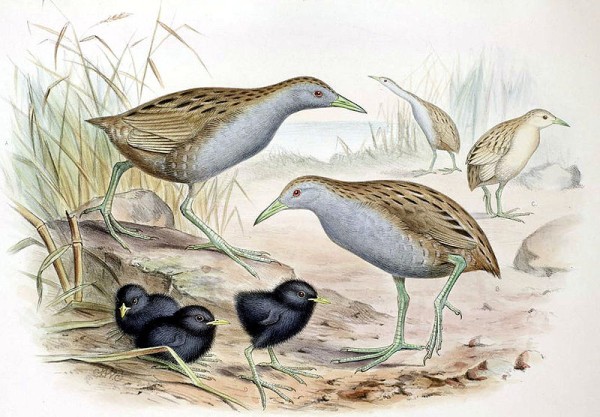 On Monday I wrote about cats and windmills as threats to bird life but neither of them are the leading reason why birds die.  The number one cause of bird death worldwide is habitat loss.

The Laysan rail (Porzana palmeri), pictured above, went extinct in the 20th century because of habitat loss with a bizarre twist.

Laysan is a small, isolated island in the middle of the Northwestern Hawaiian Island chain.  Only 1 by 1.5 miles across its land area is 1,016 acres, about twice the size of Schenley Park.

Laysan is famous for its bird life, a nesting island for many Pacific seabirds and home of the rare Laysan albatross and even rarer Laysan duck.  It was also the home of the Laysan rail, a fearless, flightless bird less than 6 inches long.

Unfortunately, in 1903 Max Schlemmer released rabbits on the island as a money-making venture.  Instead of making money it was the beginning of the end.  The rabbits on Laysan had no predators and in short order they overran the island.  (Keep in mind that a rabbit can bear 35 young per year.)  The rabbits ate everything.  Everything.

By 1918 Laysan was a barren dustbowl on which only 100 rabbits survived.  With little to eat and no cover the Laysan rail population was hanging on by a thread.  Meanwhile a few rails had been introduced to other islands in the northwestern Hawaiian chain in hopes they could survive elsewhere.

In 1923 the Tanager Expedition eradicated Laysan’s rabbits but it was too late for the rail.  The last two on the island died that year.  A few hung on at other islands in the chain but the final blow fell in 1944 when a World War II ship drifted to shore on Eastern Island, Midway and the ship’s rats swam ashore.  The rats ate the last Laysan rails on earth. That was that.  Extinction.

In the broadest sense, loss of habitat killed the Laysan rail.  In a narrow sense it was a case of extinction by rabbit.

(drawing by Walter Rothschild from Wikimedia Commons. Click on the image to see the original.  Today’s Tenth Page is inspired by page 640 of Ornithology by Frank B. Gill.)

2 thoughts on “Extinction By Rabbit”