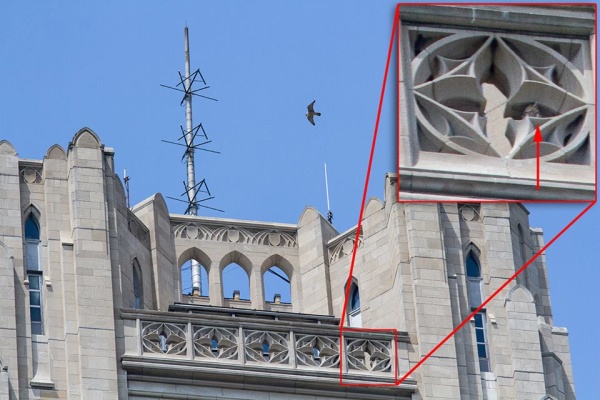 In my Pitt Peregrine Fledge Watch announcement I said, “If the chick is off camera, come on down! The best view is from the tent.”

Well, our peregrine chick has been on and off camera for two days!  On May 28 he ledge-walked up to the webcam and yesterday he jumped into the gully below the nest.  His prior-year brothers who explored the gully took more than 24 hours to return to the nest.  Baby made it back in only 7 hours.  A record!

On his way back topside he spent at least half an hour perched in the keyhole — see Peter Bell’s photo above.  Several of us at Schenley Plaza saw his parents put on a fancy airshow but didn’t make the connection that it was for Baby’s benefit.  Peter’s photo proved it.

So, yes, the chick is off camera and, yes, the best viewing is from the tent.  Come on down today through June 5!   Click here and scroll down for the REVISED SCHEDULE.