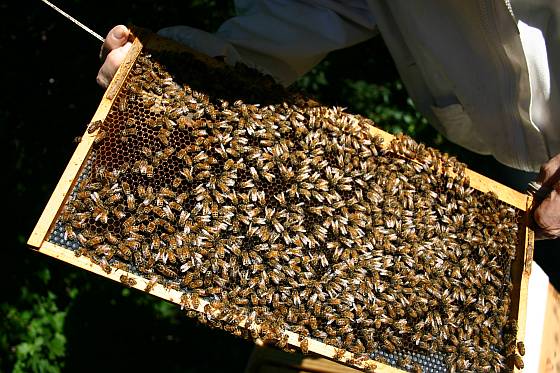 Yesterday we saw how beekeepers open the hive.  Today we see what the bees are doing.

Beehives are like dense cities containing food for all the bees and baby nurseries for the next generation.  Since bees don’t live forever the queen must constantly lay eggs to keep the city running.

The queen lives one to five years laying 1,500-2,000 eggs per day after a single (or several) day mating flight.  She is able to selectively fertilize each egg from the stored sperm of 12-15 drones.  The hive lasts as long as there’s a productive queen but the workers have a backup plan.  When they need a new queen they feed selected larvae (laid in queen cups) on royal jelly alone.  Click here for more information on this process.

Below is a photo from Wikimedia Commons of a queen bee with workers.  She is noticeably longer than her workers but is sometimes hard to pick out so beekeepers often mark their queens with a dot of color or a tiny sticker. 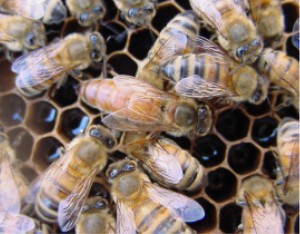 Interestingly the queen does not control the hive but she is treated like a queen. Her every need is met and her reign continues as long as she emits a pheromone that inhibits the workers’ desire to produce a new queen.

In summer workers live about six weeks.  Their duties change as they age.

Young workers start inside the hive near the egg chambers, cleaning the hive, keeping the temperature a constant 93 degrees F, producing royal jelly, and feeding larvae.  All larvae eat royal jelly for a day or two before switching to pollen and honey.  Only future queens are fed royal jelly exclusively.

When larvae develop to the pupation stage, the workers cap the chambers as shown on the frame below. 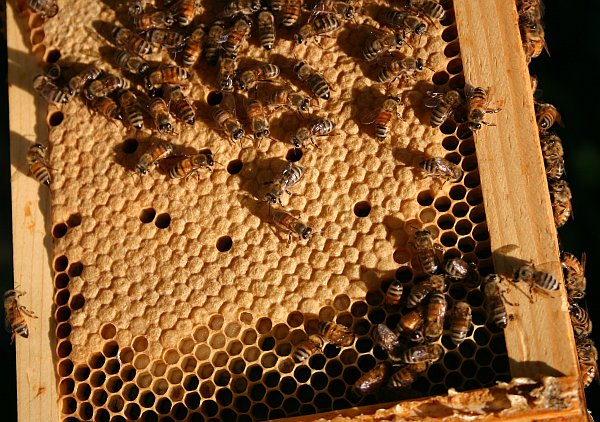 Joan noticed that a new worker bee was emerging from her pupation chamber for the first time.  I’ve circled her below in green.  The process is a little like hatching as she chews her way out.  It was cool to see a new bee being born.

Beekeepers like the bees to build honeycomb on frames separate from the brooding chambers so that no bee larvae are killed during honey harvest.  In the 1700’s beekeepers invented a small hive section called a “super,” that’s placed at the top of the hive and achieves that goal.

Here’s a hive frame containing only honey.  The older comb is darkest.  You can see the honey glistening in the comb. 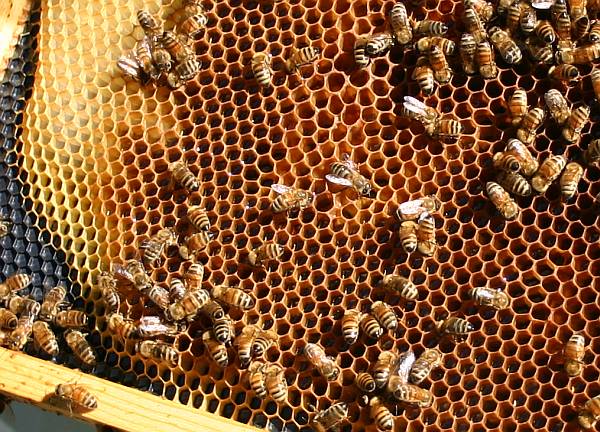 When they’re three weeks old, summer workers graduate to outdoor foraging.  These are the familiar bees we see gathering pollen in sacks on their legs and filling their crops with nectar to carry it back to the hive.  They travel up to 1.5 miles to find food.

Honey bees stop flying when it’s 50 degrees F and huddle in the hive to stay warm.  They surround the queen and shiver their muscles to keep the center of the hive a constant 81 degrees F during the broodless period in early winter.  When the queen resumes laying they raise it back to 93F.  These are the workers who live through the winter, eating honey to survive.  They consume 30-100 pounds of it!

Though there are 20,000 species of bees on earth the European honey bee is our bee of choice because it forms large hives (lots of honey!) and the hives are perennial.  None of the native North American bees can match this.  They all die off in the winter, leaving only the queen to start over next year.

Thanks to Joan Guerin for the honey bee tour.  She is WQED’s Interactive Director, our website’s queen bee.  😉

(queen bee photo from Wikimedia Commons. All other photos by Kate St. John)

p.s. Stay tuned next week for more news about bees.

1 thought on “Inside The Hive”