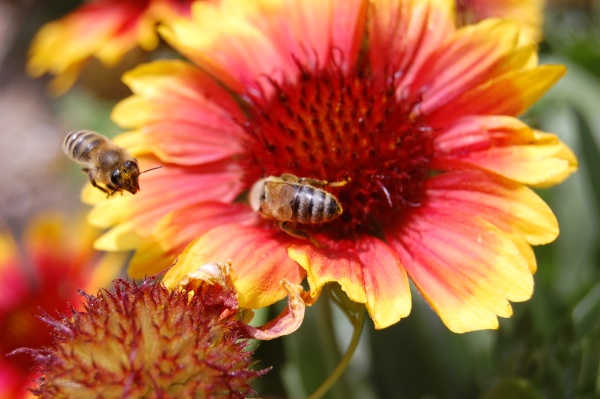 After I met Joan Guerin’s honey bees this summer I became attuned to news that affects them.  An article about the greening of Florida’s citrus trees raised an alarm.

Since 2006 a third of the honey bee colonies in the U.S. have suddenly collapsed and died.  Their disappearance is not merely a honey crisis, it’s a food crisis because the majority of our crops are pollinated by commercially tended honey bees.  Fruits, soybeans, sugar beets, alfalfa… the list of crops is huge and worth over $15 billion.

In the U.S. most news reports say “We don’t know what causes bee collapse. It’s probably a number of factors including pesticides, parasitic mites, inadequate food, and a new virus” yet on April 29 the European Union banned three pesticides for two years to save their bees.  This came 16 years after French bee-keepers concluded that neonicotinoids harmed bees and ultimately caused their colonies to collapse.

In the mid-1990s French beekeepers experienced brutal bee population losses that coincided year after year with the sunflower honey season.  What had changed?  In the mid-1990s French sunflower growers began planting seeds coated with a neonicotinoid pesticide called imidacloprid that protects plants by becoming a systemic insect poison in the roots, stems, leaves, pollen and nectar.  Bees are insects. It ultimately killed them, too.  Even low doses weaken the bees’ immune systems so the EU placed imidacloprid, clothianidin, and thiametoxam on a two year moratorium.

Not so in the U.S. and the U.K.  The Guardian points out that despite evidence from beekeepers around the world, regulators in our two countries prefer to take the chance of not regulating a bad substance rather than accidentally stopping a good one.  Neonicotinoids are used on 95% of our corn and canola and the majority of our bee-pollinated crops and they persist in soil and water even after the treated plants are gone.  Some disturbing events in the U.S. point to additional trouble ahead.

In June a landscaping company in Wilsonville, Oregon sprayed 65 linden trees in a Target parking lot with the pesticide “Safari” that contains dinotefuran neonicotinoids.  They did this for cosmetic reasons — to kill aphids that cause the lindens to dot sap on the cars below — but the result was catastrophic.  The trees were blooming.  50,000 bumblebees died.  The only way people stopped additional deaths was to drape the trees with nets so the bees couldn’t touch them.

Last weekend I read about the “greening” of Florida’s citrus trees.  This is not a happy color change but the sad irreversible death of all citrus trees from a bacteria carried by the Asian citrus psyllid.  Initially the only solution was to chop down infected trees but some farmers decided to keep on farming by nurturing their trees and using intensive systemic insecticides to kill the Asian citrus psyllid.

Imidacloprid, the chemical implicated by French beekeepers and now banned by the European Union, is being used to “save” the citrus groves.

Connect the dots.  Oh no!

(photo by Mihael Simoni? from Wikimedia Commons. Click on the image to see the original)

5 thoughts on “Threats To Bees: Connect The Dots”