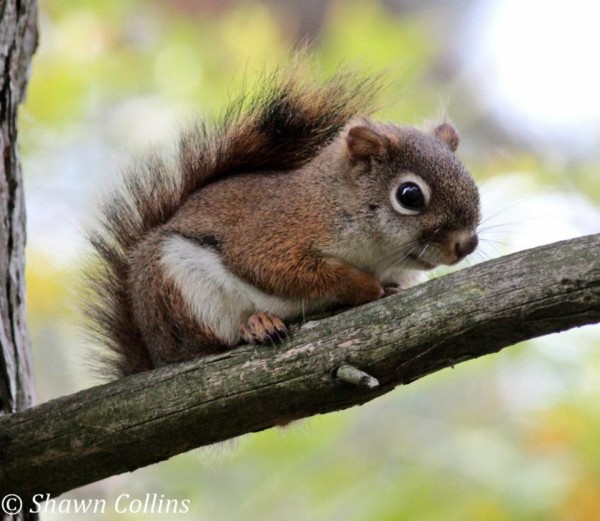 So cute!  But watch out, he’s fierce.

His small size, soft red fur, fluffy tail and big eyes are certainly cute but the red squirrel is also curious and combative.  I think his food habits made him that way.

Unlike gray and fox squirrels, red squirrels (Tamiasciurus hudsonicus) don’t bury one nut at a time.  Instead they gather food in a big cache called a midden in a hollow tree or underground.  This takes a lot of time and effort:  climb the trees, walk the branches, bite off the green cones, watch them fall, scurry down later and collect the cones, repeat the process. Along the way they pause to eat at the same prominent locations leaving debris piles, also called middens, that seem to say “I am here!”

The red squirrel defends a 1 – 8 acre territory against everyone, especially other red squirrels.  He’s curious about new arrivals but then, watch out!

First line of defense?  Shout at the competition!  Burst into a sudden loud chatter that slows to a wheezy hiccup.  Really mad?  Jerk your tail and stamp your feet.  Really, really mad?  Chase!

In coniferous forests that’s usually another red squirrel but in mixed forests gray squirrels also get a verbal beating and relentless pursuit.  Though the red squirrels are only 1/2 to 1/3 the size of the grays, the red ones always win.

I, too, have been ejected from a red squirrel’s territory.  He used his voice.  Click here to read about it.

Now that winter is coming the red squirrels are changing into their drabber winter coats and rushing to increase their middens.  They have no patience for anyone.