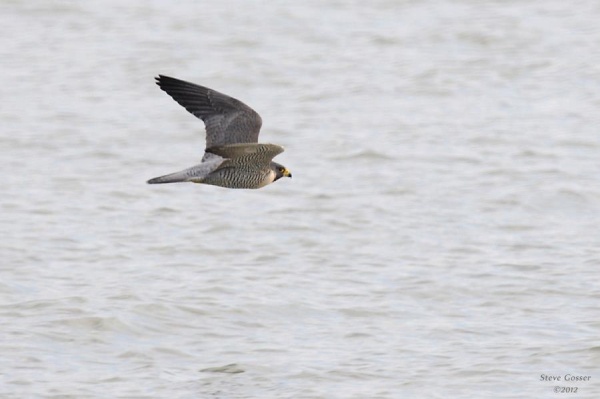 And here’s a potential food source — a flock of dunlin.

The peregrine is looking for a bird that’s easy to catch.  The dunlin are sitting ducks (er… dunlin) if they stay on the ground so they fly and flock as soon as they see a peregrine.  This interaction has made dunlin more fit in the years since the peregrine population has recovered from the DDT crash.

A 2009 study at the Fraser River delta on the Pacific coast backs this up.  Peregrines never went extinct on the West Coast but they were very scarce in the 1970’s.  During this period wintering flocks of dunlin safely roosted on the sand at high tide and became fat — and a bit slower — in early winter.

The peregrine population began to recover in the 1990’s and soon found tasty dunlin meals as they migrated past the Fraser River delta in fall and spring. The dunlin quickly learned it was unsafe to roost at high tide during the day because peregrines were on patrol.  Instead they began to spend high tide flocking over the open ocean, flying and flying for three to five hours.  With this exertion they became much more fit and are now are measurably thinner in early winter, the time when peregrines are passing by.

Peregrine falcons have provided dunlin with a fitness program.  Be fit or be eaten.

1 thought on “Peregrines As A Fitness Program”