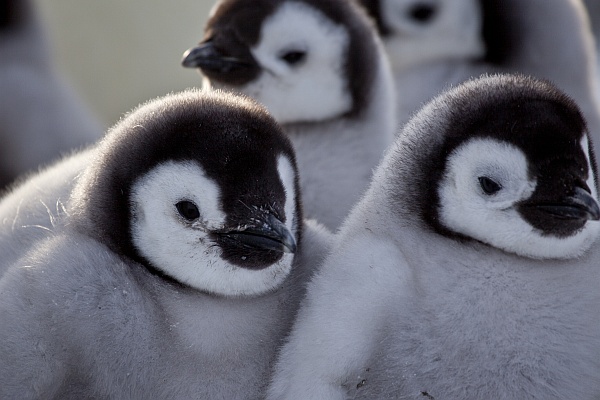 Last night(*) in the second episode of Penguins: Spy in the Huddle we saw how vulnerable young penguin chicks can be.  Fortunately, the dangerous period doesn’t last long.  In this final episode they’ll grow up and become independent.  Whew!

Independence is forced on penguin chicks because they’re so hungry.  Both parents have to fish to keep up with their kids’ demands so the chicks are left largely alone.  Young emperors naturally huddle in a crèche but rockhopper teenagers have to be poked to join the group by the few non-breeding adults who watch nearby.

The crèches are safe places to learn from each other but everyone’s equally clueless.  How do we walk on ice?  What is this wet stuff (melted ice)?  My gosh, my down is falling out and I’m getting feathers!

The chicks learn to fight their attackers.  Their parents bring food.  Life is good.  And then…

Their parents don’t come back.  Amazingly this triggers a desire to walk to the ocean, a place they’ve never seen.  Everything is new but they figure it out and even get help from some unexpected allies.

By now we’re all convinced that penguins chicks are clumsy … until they jump in the ocean.  Oh my!  They fly underwater!  Faster and faster, the rockhoppers make beautiful bubble trails as they disappear in the distance.  Such joy!

Watch the final episode of Penguins: Spy in the Huddle, “Growing Up,” on PBS next Wednesday, October 8 at 8:00pm EDT.  In Pittsburgh it’s on WQED.

(*) If you missed Episode 2 last night because of the Pirates’ wildcard game, WQED will rebroadcast it on Friday Oct 3 (tomorrow) at 4:00am. Perfect for a DVR.

2 thoughts on “Penguins Episode 3: Growing Up”