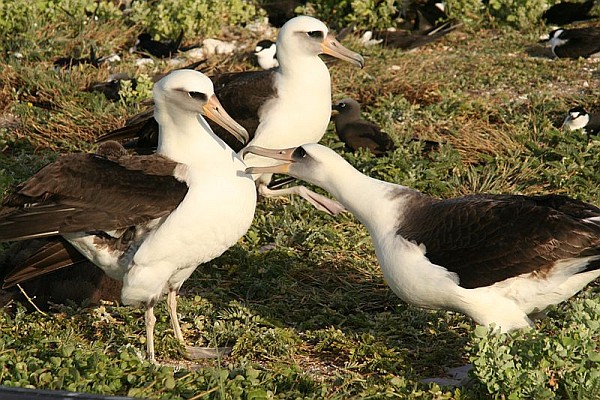 Out in the Pacific there are more female Laysan albatrosses than males.  The males will mate with the extra females but it takes two parents to raise the chick.  A single mom can’t raise her chick alone.  What’s a girl to do?

A long term study of Laysan albatrosses, published in 2008, shows that the extra females pair up in reciprocity agreements.

Albatrosses are such big birds that it takes most of a year for their solo chicks to mature and fledge.  Rearing the chick takes so long and is so labor intensive that female albatrosses lay one egg every other year.

Without a mate to help with nest duty the chick will die.  Researchers on Oahu, where the Laysan albatross population is 59% female, discovered that unrelated females on opposite fertility cycles pair up and raise each others’ chicks.  At the start, only one of them lays an egg and the pair incubates and raises the chick together.  When it’s egg-laying time again, the other female takes her turn.

Though their nesting success is lower than for male-female pairs, it works well enough that these girlfriends stay together for many years.

Ladies make do in a pinch.

(photo from Wikimedia Commons. Click the image to see the original)

5 thoughts on “Ladies Make Do In A Pinch”