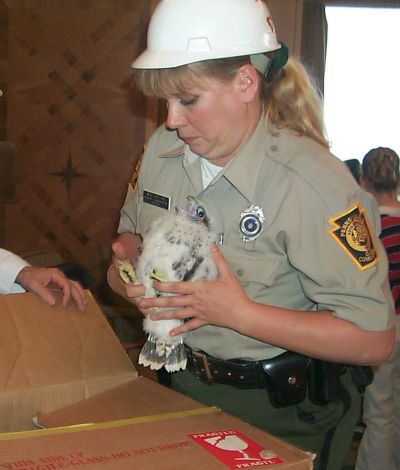 Question:  Why and how are peregrines banded?

Answer:  Ever since the peregrine falcon population crashed after World War II, the species has been one of the most studied wild birds on earth.

As with any bird, scientists want to know “Where do they go?”   The simplest way to find out is to place color and number-coded bands, like bracelets, on the birds’ legs.  The codes are recorded in a national database that includes weight, sex and banding location.

By law, only wildlife management agency personnel (US Fish and Wildlife and state wildlife agencies) and those they authorize are allowed to visit the nests.  Banding can only be done by those who are licensed to do so.

The best time to band peregrines chicks is when they are between 22 and 30 days old.  At this age they are adult size but have not fully grown their flight feathers.  This means the correct bands can be applied and the chicks won’t attempt to fly away when approached.  Beyond 30 days old they may jump from the nest prematurely believing that they can fly to escape – and it could kill them.

Collecting the chicks is a dangerous job.  Not only is the nest high on a sheer cliff (or building) but the parents attack anyone approaching them.  Peregrines are loud and fearless – even reckless – when protecting their young.  They fly at the intruders and hit them with their sharp talons.  If their chicks have been banded in prior years they become more aggressive with each succeeding banding event.  One way or another peregrines try to draw blood.

After the chicks are collected they are weighed to determine their sex.  Usually the weight difference is obvious:  males weigh less than 700g, females weigh more than 800g.  When there are borderline weights, such as 790g, the female band is applied.  If time permits, the chicks are given a complete health check including a blood test and an exam for parasites and fungal infections.

The chicks are returned to the nest as soon as possible after the banding.  At first the entire peregrine family is still upset but the parents soon calm down and the chicks fall asleep.  I’ve noticed that adult peregrines who’ve witnessed prior bandings calm down quickly.  They seem to know the routine.

Note: In Pennsylvania, birds and mammals are under the supervision of the PA Game Commission.  Peregrine falcons are listed as a state endangered species by the Game Commission.

(photo of Beth Fife, PA Game Commission, preparing to return a banded chick to its nest, May 2003, by Jack Rowley, Western PA Conservancy)

1 thought on “Banding: Why and how are peregrines banded?”