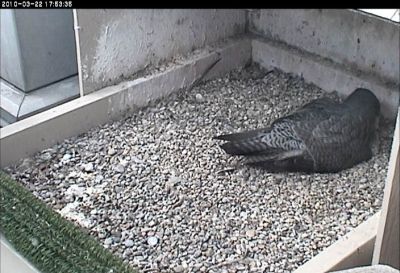 Question:  Which parent is sitting on the eggs?  What role do the parents play during incubation?

Answer: Incubation does not begin until the next-to-last egg (usually the 3rd) is laid. It lasts until the eggs hatch in about 33 days.

The peregrines’ typical daily routine during incubation is:

The amount of incubating the male does depends on the couple’s preference.  Some males share more incubation duties than others.  In the middle of the incubation period, the male is on the eggs 30-50% of the daytime hours.  Towards the end of incubation when the eggs are about to hatch, the female spends most of the time on the nest.  She insists on being there to assist the chicks as they break out of their shells.

So which parent is on the eggs right now?  If it’s the middle of the night, it’s the female.  Otherwise, you’ll have to watch closely at “shift change” to see which bird is larger.

p.s. For information on incubation, click here and scroll down to the section beginning with “So, just how does incubation work?” at Rochester Falconcam.

(photo from the National Aviary webcam at the University of Pittsburgh)

2 thoughts on “Nesting: What roles do the parents play during incubation?”