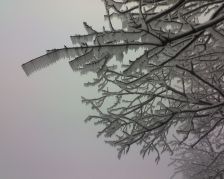 Fog:   Today I took a vacation day to go to the Allegheny Front Hawk Watch on Allegheny Mountain just inside Bedford County.  The weather was supposed to be great for watching hawks – an east wind and sun – but there was no sun.  Instead thick freezing fog which deposited icy feathers on the trees — rime — as you can see from the picture I took with my cellphone.  Notice that the sky is white.  That’s the fog.

Bummer.  I drove two hours only to find out it was fogged in.  In fact, the edge of that mountain was the only place totally fogged in.  Knowing the weather for the nearest town, Central City, is no help.  The only way to know what the weather is like on the mountain, is to be there.

Coal:  Don’t let anyone tell you coal is ‘clean’ energy.  There’s a huge active strip mine south of Central City.  Loaded coal trucks leave the site every few seconds and drive on Routes 160 and 30.  The coal dust from these trucks lines the road, coats the roadside vegetation and splashes up on the cars.  When they say coal towns are gritty it is literally true.

Ducks:  Rather than go home I went down to Shawnee State Park in the valley near Schellsburg.   It was overcast and chilly but nicer than the mountain.  There were four common loons on the lake, a flock of ring-necked ducks, hooded mergansers, a few black ducks, mallards and the best bird – three long-tailed ducks. I have not seen long-tailed ducks since 1997 so these were a special treat.

I know the ducks will leave tonight.  Two duck hunters with a black Labrador retriever arrived at 3:30pm and set out decoys.  I hope the ducks are not fooled and that they all escape – especially the long-tailed ducks.

2 thoughts on “Fog, coal and ducks”