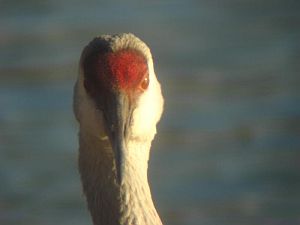 Well, to be exact, there’s a sandhill crane at Ethel Springs reservoir between the village of Peanut and the town of Derry.  (The reservoir is also called Derry Lake.)

Sandhill Cranes are unusual in Pennsylvania and unheard of in the Laurel Mountains so it was quite surprising when this one showed up last month.

Most sandhills breed in Canada and the western U.S., then migrate to Texas, northern Mexico and Florida for the winter.  They usually travel in flocks and family groups but this one is alone and far off its migratory path.  Cranes feed and breed in open marshes and wet grasslands.  Perhaps the lake was this bird’s last best choice when it saw the mountains up ahead.

The crane survived our early January cold snap by hanging out with the resident mute swans and mallards.  I suspect some kind-hearted folks made sure it had something to eat.  People walk and jog on the lake path yet the crane is as unconcerned by humans as the ducks are.

Cranes are huge birds – four feet tall – and unmistakable.  People sometimes confuse them with great-blue herons so that may be why this one is not stirring up a lot of attention. Birders, however, are pretty psyched.  Tim Vechter has been watching the crane for a few weeks and provided these photos.

I hope the sandhill crane enjoys its stay and makes it safely home to Canada in spring.  It will certainly have quite a story to tell when it gets there.

2 thoughts on “A Crane at Peanut”