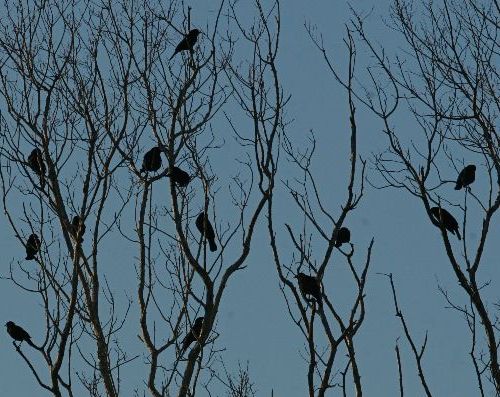 It’s not fall but I’ve been seeing a fall phenomenon:  large flocks of grackles.  These are not the huge November flocks that number in the hundreds but they’re larger than family groups.

At dusk they gather at the Monongahela River near Greenfield.  At dawn they fly east over my house making flight calls, a soft chucking sound.

Sometimes they land in my yard, graze on fallen seed, and play in the bird bath.  That’s when I discover the flocks are made up entirely of immature common grackles and starlings.  I can tell by their colors.  The gang wears brown.

Juvenile common grackles have brown feathers, brown eyes, brown legs and brown beaks.  They lack the iridescent feathers of their parents whose yellow eyes and black beaks and legs make them stand out.  Juvenile European starlings are also basic brown without the oily sheen of the adults.  They too have brown beaks and sometimes a dark eye line.

But the juveniles are molting.  I can see new, starry feathers on the starlings and the beginnings of iridescence on the grackles.  Soon the juveniles will resemble the adults.

Who knows when the adults will join these flocks.  In August?  September?  Will I be able to tell the difference when the young resemble their parents?  I don’t know.

For now it’s just a gang of teenagers.

2 thoughts on “Gangs of Teenagers”