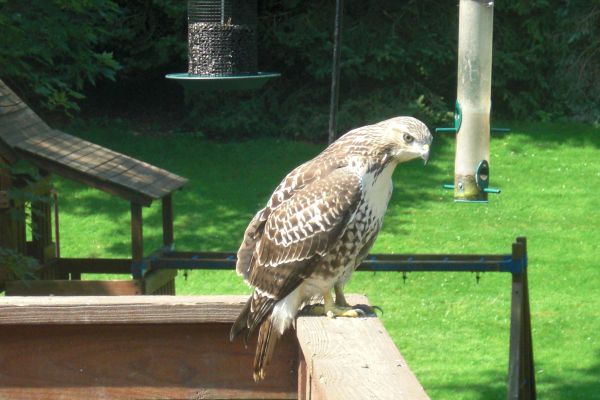 When you’re young you’re fearless.  You disregard life’s dangers because you can’t imagine anything will hurt you.  And when you’re busy you’re focused.  Very focused.

That’s what David Solomon’s family is learning from some immature red-tailed hawks in their neighborhood.  The Solomon’s have bird feeders that attract birds and squirrels which in turn attract young red-tails.

The hawks aren’t good hunters yet so they’re looking for an easy meal.  Their parents told them to watch out for humans but this hawk is so focused he doesn’t care that Michael Solomon is standing only a few feet away taking his picture.  In this hawk’s limited experience people don’t bother you so why care.

Immature red-tailed hawks must change this nonchalant attitude if they’re to survive to adulthood.  The birds travel long distances in their early years and, though most of the people they’ll encounter are in awe to see a hawk this close, there are still some people who will harm them even though it’s against the law.  It’s best to keep a wide berth.

In the meantime, hunger trumps danger.  There’s something to be said for single-mindedness but it can be carried too far.