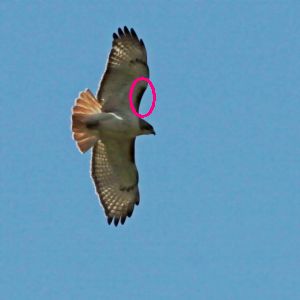 I came across the term “patagial mark” at the Allegheny Front Hawk Watch in November when I was having trouble identifying a passing red-tailed hawk.

Usually red-tails are easy for me to pick out by their size, shape and belly bands but the bird in question had a pale belly like the one pictured here, was far away and was fighting the wind.  A fellow birder pointed out that I could always identify a red-tailed hawk if I looked for the “dark patagial marks.”

The patagium is the stretch of skin on the leading edge of the bird’s wing extending from the head to the wrist.  The noun patagium is rarely used but its adjective form, patagial, is fairly common.

For instance, red-tailed hawks have light-colored underwings and a dark patagial mark, shown here circled in pink.  It’s a good field mark because no other hawks in eastern North American have this combination.  Try comparing the underwings of red-tailed hawks to red-shouldered, broad-winged or (western) ferruginous hawks for a bit of fun.

Another use of the word is in “patagial tags” which are bird bands applied to the wing on large soaring birds so that researchers can read the tag while the bird is in flight.  The tag hangs below the wing so it doesn’t interfere with the bird’s ability to fly.  California condors, our biggest bird, have the biggest patagial tags.  Click here to see a patagial-tagged ring-billed gull Chuck Tague saw in Florida last winter.

So, yes, I knew about those dark spots on the red-tail’s wings.  I just didn’t know they were so unique.