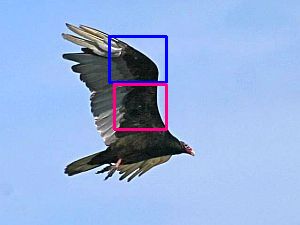 Today I’m back to wing anatomy and the huge topic of coverts.

What are wing coverts?

As their name implies these feathers cover the important part of the wing – the flight feathers – and provide contouring so that air flows smoothly during flight.

Upperwing coverts are also named primary, secondary, greater, median and lesser.  These coverts are the wing feathers you see when the bird is perched or standing.  On many birds the upperwing coverts are colorful or striped and provide key clues to identifying the species.  Take a look at warblers and you’ll see what I mean.

So how many kinds of wing coverts are there?  After tantalizing you with the topic I won’t go into it very deeply but here’s a list of as many wing covert names as I can find.  Most of these come in upperwing and underwing varieties:

Yow!  This is almost boring. Fortunately there will not be a quiz.

(photo by Chuck Tague, altered to illustrate its underwing coverts)