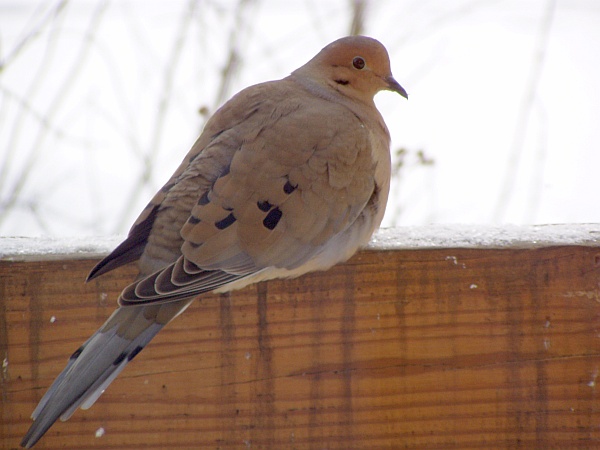 Yesterday a mourning dove landed at my feeder with a clenched foot, probably suffering from frostbite.  The temperature was 9oF when I saw him.  It had been 2o at dawn.

Even in severe cold weather we rarely see birds with frostbitten feet so we tend to forget that it’s possible.  Gulls and Canada geese stand on ice, cardinals and chickadees hop on snow, and we take for granted that their bare feet won’t be hurt as ours would be.

For most birds this is because of a special adaption that allows their feet to be cold in comfort.  Birds’ feet have fewer nerves and blood vessels and a unique circulatory system.  The veins and arteries in their legs are intertwined so that cold blood leaving their feet is warmed by the arteries delivering warm blood.  As Dr. Tony Bledsoe pointed out, “This operates as a counter-current exchange system, so that nearly all of the warmth in the descending blood is transferred to the ascending blood.”

For some reason this system isn’t as effective in mourning doves and their feet are prone to freezing.  Since they’re a game bird (did you know they’re hunted in 38 states?) they’ve been studied extensively.  In one study, mourning doves with frostbitten feet were rescued.  They recovered from their injuries in six weeks but their damaged toes fell off.  They survived to a normal life span with fewer toes, but life is short for a mourning dove anyway.  Their average adult life expectancy is only one year.

I felt bad for the bird at my feeder but I know that if he has enough to eat he’ll survive.  The real killer right now is lack of food and since mourning doves eat from the ground their food is repeatedly covered by snowfall.

I’ll keep my feeders filled and hope for the best.