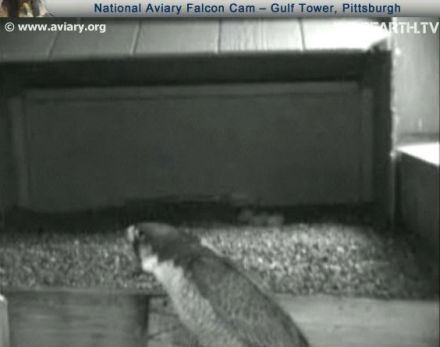 Yesterday afternoon Dori laid her third egg so this morning I looked through the video archives for footage showing all five: the two eggs laid by the previous resident (Tasha) and Dori’s three.  I looked especially for nighttime images because the eggs show up so well under infrared light.

What I found was a surprise.

Around 11:15pm last night, Dori was incubating the eggs when something flew by and caught her attention.  She got up and trotted to the left, out of camera range.  I could hear ee-chupping, then little eee sounds, then a distant wail.  Silence.  For more than ten minutes there no bird sounds except one or two distant wails.  No birds on camera.

After ten minutes Louie appeared, walked to the scrape and adjusted the eggs.  Male peregrines don’t usually incubate at night.  What was going on?

Louie spent about 5 minutes with the eggs, standing over them, peeping softly.  A peregrine wailed in the background.  Louie left the eggs and walked down the ramp where he paused to listen (pictured here, approx 11:39pm).  Then he was gone.

I wonder what happened.

We’ll never know.  The archives broke after that for the next two hours (they saved the same two seconds with a new time stamp) and when they resumed at 2:00am all was calm and Dori was incubating.

Another night in the life of peregrines. 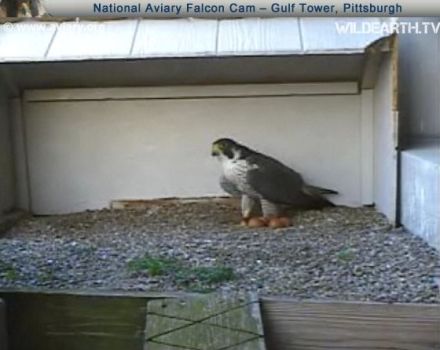 (photos from the National Aviary webcam at Gulf Tower)

6 thoughts on “What were they doing last night?”