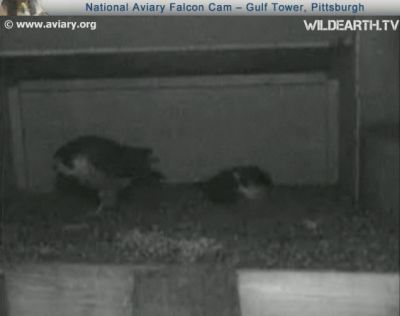 It was another strange night at the Gulf Tower peregrine nest in Downtown Pittsburgh.

As I mentioned yesterday, Dori and Louie were active the night before, unexpectedly on and off the nest.  Then yesterday afternoon I received a clue.  Barb Becker at Make-A-Wish told me that Louie and Dori were both at the nest when a third peregrine wailed in the distance.  Hmmmmm!  Sounds like Tasha is still in town.

This morning I checked last night’s video archives and saw that Louie incubated most of the night.  It’s highly unusual for the male to do this, so something odd must have been going on.  Here’s the sequence of events:

These two are dutiful parents.  The temperature dropped yesterday in Pittsburgh from the high 70’s during the day to the 30’s last night.  Perhaps Louie knew Dori had some unfinished business that could take her away from the nest unexpectedly so he decided to incubate all night … just in case.

(photo from the National Aviary webcam at Gulf Tower)

15 thoughts on “Another strange night at Gulf Tower”