Here are some quick tips for telling the difference between the two adult peregrines on the Gulf Tower falconcam.

Dori, the female, is on the left, her mate Louie is on the right.  These clues are listed in order of importance:

Here are two more photos showing Dori, then Louie, in the same scrape.  She is large!  He is small.  Female peregrines are larger than males.

I have written their band numbers on the photos even though it’s nearly impossible to read them on camera.

If you see both birds together you can identify them immediately by size, as shown in the photo below. Dori is huge. No wonder Louie bows low! 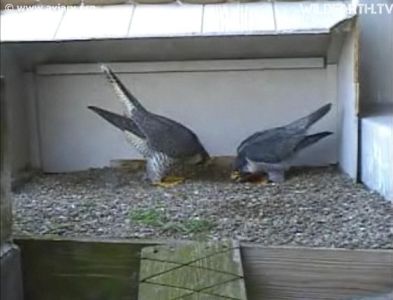 Watch them online here and see if you can tell the difference.

(photos from the National Aviary webcam at the Gulf Tower. Thanks to Marianne Atkinson for capturing the big bowing screen shot.)

7 thoughts on “Who is Who at Gulf Tower?”