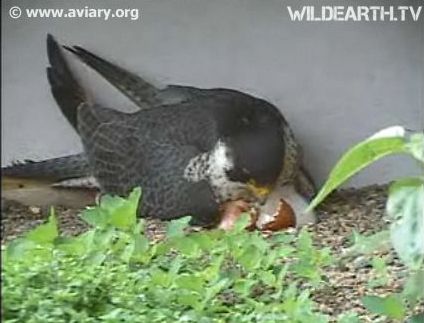 Every egg has hatched!   The last chick is pictured above, hatching at 5:35pm.

Baby peregrines have now emerged from all five eggs at the Gulf Tower in Pittsburgh.

This is remarkable because of their history.

In mid-March Tasha, the former female resident, laid two eggs but her clutch was not complete when she was challenged by Dori for ownership of the nest site.

On the night of March 19th the challenge was intense when viewers heard peregrine wailing on the webcam.  The next morning Tasha was seen on camera for the last time.  By that evening Dori had won the site and bowed with Louie over the nest scrape.

While Louie and Dori got to know each other, Tasha’s two eggs were unattended.

Then, at the end of March, Louie started to incubate Tasha’s eggs and made it very clear to Dori that she should put her eggs with Tasha’s when she was ready to lay them.

On the night of April 2, Dori laid her first egg in Tasha’s nest scrape.  By April 7 she had laid three eggs and she was incubating all five.

Since Tasha’s eggs went unattended for two weeks and Louie incubated them fitfully during that period, many of us thought that only Dori’s three eggs would be viable.

Not so!  It’s a tribute to Louie’s perseverance and Dori’s new mothering skills that all five have hatched.

So now we have five baby peregrines at Pitt and five at Gulf Tower.

(photo from the National Aviary webcam at the Gulf Tower, captured by Marianne Atkinson.)

33 thoughts on “Make that Five Out of Five!”