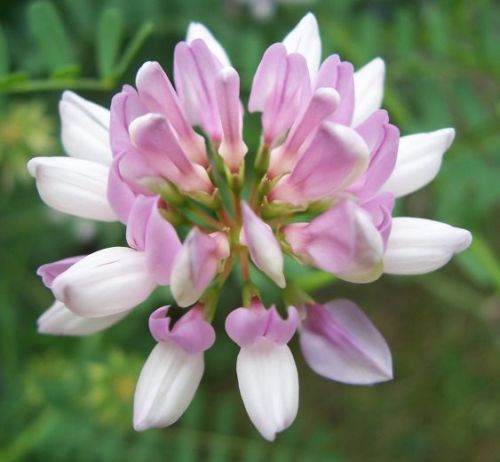 One of the prettiest flowers you’ll see by the road at this time of year is one of the most aggressive, invasive plants in North America.

Crown vetch (Securigera varia) was introduced in the U.S. in the 1950’s during our interstate highway boom.  It was hailed at the time as a fast growing, drought resistant ground cover and planted extensively along the new highways to eliminate the need to mow.

Those same characteristics allowed it to smother the native plants it encountered in its path.

Crown vetch is native to Europe, southwest Asia and northern Africa.  It thrives in open, sunny places, spreading by seed and rhizomes.  It has no North American enemies, nor can it be eaten by farm animals or wildlife because it contains nitroglycosides which cause slow growth and paralysis if consumed in large amounts.

Sixty years after its introduction to America, crown vetch is listed as invasive in 45 states.  If you’ve ever tried to eradicate it you’ll know why.

I once planted a free seed packet of wildflowers in my front garden.  To my dismay the seed company included two — just two! — crown vetch seeds in the mix.  I let them grow that first year.

The next spring I was left with two perennials and two crown vetch plants.  I pulled the vetch and planted new flowers but the vetch reappeared in more places than I’d pulled up.  I weeded, it reappeared, over and over and over again. Yikes!

The only solution was to give up on the other flowers and aggressively pull out every crown vetch plant and its root as soon as it appeared.  It took two years of meticulous weeding before I eradicated the vetch from my small garden.

You can buy this pink invader … but DON’T!

(photo by Trisha M. Shears via Wikimedia Commons.  Click on the photo to see the original.)