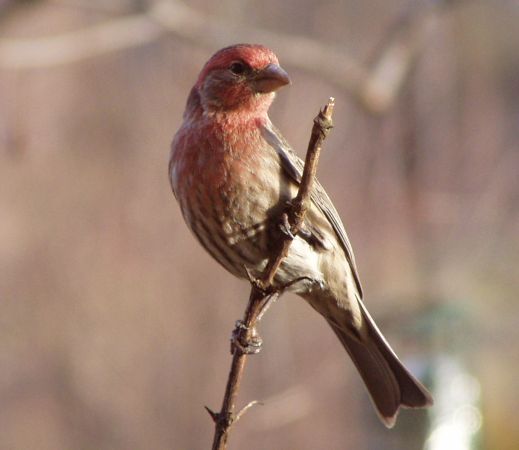 I know of four birds whose name begins with “house.”  This house finch is one of them.

Common at backyard bird feeders, the house finch didn’t live east of the Rockies until the illegal pet trade tried to sell them as “Hollywood finches” in 1940 in New York.  Just as the law was about to catch up with them, the traders released the birds on Long Island.  The “evidence” was gone but not forgotten.  The house finches set up housekeeping in the east and slowly expanded north, south and west.  They’ve now met their western relatives mid-continent and are found across the U.S.

House finches prefer edges, not too open, not too forested.  In the east they live in cities and suburbs and since they’re one of the few birds who feed their young only vegetables — not even insects — bird feeders are important to them.

When a bird has “house” in its name that usually means it nests in a hole but house finches don’t always do that.  Their main site criteria is that the nest have an overhang.  It may be they got the name “house” because the other finches won’t use holes at all.

Can you name three more birds whose names begin with “house?”  Here are some hints: