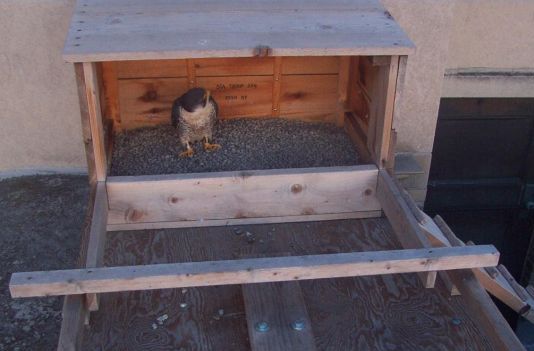 Dorothy, the female peregrine at the University of Pittsburgh, has successfully fledged 34 young in her ten years as Queen of the Cathedral of Learning, so it’s no surprise that we hear of her many offspring.

What is a surprise is the soap opera that’s playing out with her daughter and granddaughter in Rochester, New York.

In 2007 Dorothy and Erie (her previous mate) fledged four young.  One of them was Beauty who flew to Rochester, New York and settled at the Times Square Building.  Here she is at the nest box after her arrival in 2009.

This spring Beauty is incubating three eggs under the watchful eyes of five cameras and Rochester’s dedicated falcon fans, but her nesting season got off to a slow start.  She laid one egg April 1, then waited eight days to lay the second.  This was probably because her mate Archer was not very attentive.  Watchers reported him in another part of town hanging out with a second female peregrine.  Hmmmmm!

Eventually Archer paid attention to Beauty, they completed their clutch of eggs, and everything seemed to calm down.  However, the second female peregrine stayed in town and settled at Kodak Park four miles away.  This female also has eggs and a mate who’s often missing.  Hmmmm!

This week the watchers identified the second female and solved the mystery of her mate.

The second female peregrine is Unity, born of Belle at the University of Toledo, Ohio.  Belle is Dorothy’s daughter from 2003 so she and Beauty are sisters, four years apart.  That also makes Unity Beauty’s niece.

And here’s where Peyton Place comes in.  It turns out that Archer is the mate to both of them.  When he’s with Beauty, Unity is alone and vice versa.  This detective work was made easier by the fact that Archer has a distinctive wing mark.

Click on Beauty’s photo above to read Rochester’s Imprints blog about the Peyton Place among Dorothy’s girls.

Archer!  How could you!

UPDATE, May 18:  Staff at the Kodak Tower in downtown Rochester saw two female peregrines fighting on there on the afternoon of May 18.  Speculation is that the combatants were Beauty and Unity.  Read about the fight here.

(photo of Beauty in 2009, from the main camera at RFalconcam)